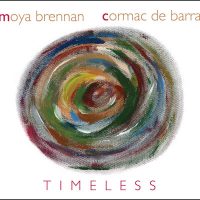 Timeless is the third release by Moya Brennan and Cormac De Barra under their Voices & Harps banner.
This album represents the most creative collaboration to date, with eight newly-written songs, two traditional tracks and a version of Christine McVie’s Songbird that’s been given the Voices & Harps treatment.
The recording began as a collaboration with Los Angeles-based producer & engineer, Lynne Earls on new music for a television project, and grew into an album of new music and songs mostly in the Irish language. It was recorded between LA and Moya’s studio in Dublin.