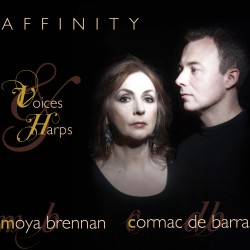 ‘Affinity’ is the second album from the First Lady of Celtic Music, Moya Brennan, and harp virtuoso, Cormac De Barra, in their Voices & Harps collaboration – a partnership combining the simplicity, depth and beauty of the extraordinary skills which make them unique in their own field.

They are both well versed in Irish traditional music and language but the new compositions on Affinity also display broader musical influences. Moya’s beguiling voice – admired around the world as the Voice of Clannad – and Cormac’s mastery of the Irish harp combine beautifully and provide a unifying vehicle for this Voices & Harps album. Both of them boast Irish as their first language so the album includes a number of Gaeilge tunes. However, these manage to sit comfortably alongside, for instance, their new version of Christopher Cross’ classic “Sailing” and their genre defying “Worlds Collide.” Their first album, Voices & Harps, was released in 2011 and led to the founding of their annual workshop in Donegal, now in its third successful year.